Joe Gregor, owner and brewmaster of Church Street Brewing in Itasca, Illinois, doesn’t have a huge tattoo across his chest, but if he did, it would probably read “Reinheitsgebot.” For those unfamiliar with this term, it’s the German Beer Purity Law, established in 1487, which states that only three ingredients should be used in the production of beer – water, barley and hops (yeast would be incorporated in the 1800s). With the current craft beer industry, in which fruits, vegetables, spices and various other ingredients are often brought into the brewing process, sometimes getting back to the simple roots of what makes beer “beer” can be a refreshing alternative.

As a full-time chemical process engineer, Gregor, 55, has traveled throughout Europe most of his working life, educating himself on various brewing styles and techniques when time allowed. It was in Germany where he discovered the beers he truly loved and the inspiration for his stateside brewing efforts, using a home kit his son gave to him as a gift. Also while abroad, Gregor discovered Germany’s many regions and just as many different styles of beer. “There’s a reason why the original German traditions of brewing have continued for centuries,” he said. “They make an exceptional product.”

After several years of refining his home brews to rave reviews from friends and family, Gregor decided to pursue the dream of starting his own brewery. With his wife and co-owner, Lisa, beside him, Gregor not only broke ground in early 2012, he did so with a spacious 8300-square-foot facility in his hometown of Itasca. With an optimistic eye for growth and expansion, he constructed the brewery with a 30 BBL system, using six 30 BBL fermenters and a yeast propagator. The “heart of the system” is a steam boiler that pushes whopping 2.9 million BTUs per hour to quickly and efficiently heat the kettles.

Brewing got underway in September 2012 and Church Street’s staff of five has had their plates full getting the operation off the ground. All of the brewery’s recipes stem from Gregor’s years of home brewing German-style lagers. With his vast engineering experience in scaling up industrial processes, methodologies and scientific principles, taking his batches from 10 gallons to 900 was just another day at the office for him. However, attention to detail with these styles of beer is a must. “With German-style lagers, there is nowhere for the flavor of your beer to hide,” said Gregor. “If you make one mistake, the whole world will taste it.”

All Church Street brewing ingredients are indigenous to the European regions the beers originated from, including grains from Heidelberg, and German and Czech hops. Gregor also has outfitted the brewery to best mimic a number of traditional German brewing practices. For instance, their new Helles beer utilizes decoction, which is a temperature-controlled mashing method that differs from the normal “step-infusion” mash only in the way the heat is applied. The difference is that in decoction mashing part of the mash is boiled in a separate kettle. The boiled part is added back to the mash to achieve the required temperature rise. The effect of the boil on the final beer is very strong, including more flavor being extracted from the grains, a slight caramelization for a fuller flavor and an overall clearer beer. Plus, the efficiency of decoction mashes is generally higher than for other methods.

In addition to their European roots, Church Street beers are also defined by their sessionability – the Brimstone IPA is their highest ABV at only 6.4%. Joining Brimstone in their year-round lineup are the Shony Scottish Ale and Continental Lager, while seasonals such as a hefeweizen, Oktoberfest and extra special bitter are in the plans (Crimson Clover Red Irish Ale is currently pouring). Gregor also will be brewing a stout chosen as the winner from a local home brewer competition.

How can you try Church Street beers? Now that they’re part of a distributor network, kegs are being rolled out from the Wisconsin border down to Joliet and out west to DeKalb. Some of their suburb accounts include Warren’s Ale House, John’s Restaurant & Tavern and Lunar Brewing, while city dwellers can find them at Map Room, Beer Bistro, Emporium Arcade Bar, Frontier, Roots, Farmhouse, Twisted Spoke and more.  Also, in the coming months, you’ll begin to see bottled six-packs in stores.

The brewery’s tasting room is open every Friday from 4-7pm with plans to open up on Saturdays in the near future. If you get the opportunity to visit, be sure to join Gregor on one of his tours, where you will get a free mini-education on the brewing process. He’s literally a wealth of knowledge and Breaking Bad fans could easily leave referring to him as the Walter White of the Chicago beer market. As a resident of Itasca for many years, Gregor is also a huge proponent of the value of small businesses and their contributions to the community. 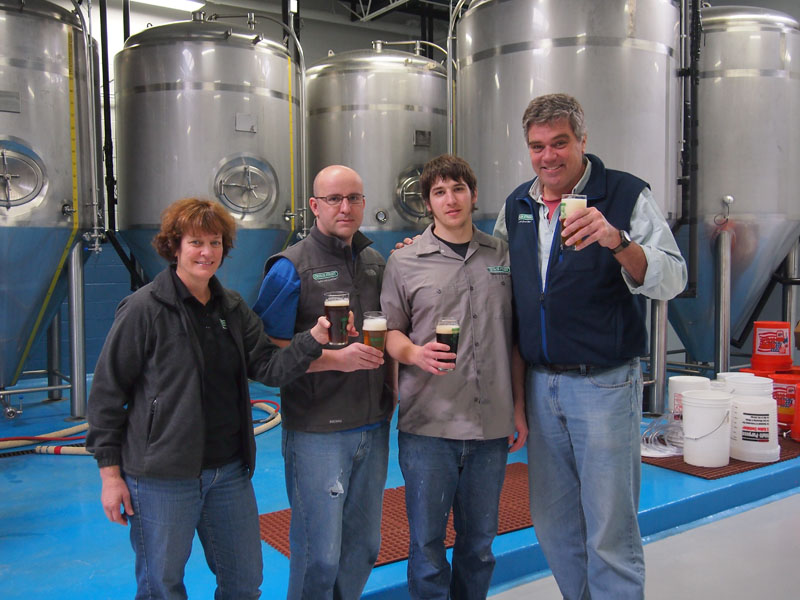